ZENITH I’ve always been fascinated by watch design but I’m not an aficionado; aficionados have an expert knowledge of the heritage and inner mechanical workings of watch making. I do however love beautiful things that are made expertly, so I connect with Swiss watch making from both an aesthetic and craftsmanship perspective. For me a watch is as much a piece of jewellery as it is functional object and I do tend to match my watches to what I’m wearing. Remember, generally for a man a watch is really the only piece of jewellery he will wear. I’m not what you would call a serious watch collector either, however I have over the years had many watches and over time reduced my collection down to a limited number of really distinctive designs that I truly connect with on an emotional level. The Zenith El Primero is one of them. It’s interesting how it has evolved and still looks as relevant today as when it was first introduced, partly I think because with the later, bigger 42mm diameter it looks proportionally better balanced and more modern than the original. Another one of my favourites by Zenith is the Elite which is a classic design similar to the Patek Philippe Calatrava. Again for me the classic aesthetic combined with the modern 42mm diameter proportion makes it highly desirable. I have both the Calatrava and the Elite in my small watch collection, which also includes the iconic Nautilus and Royal Oak, both designed by the legendary Gerald Genta. Zenith celebrated its 150th anniversary last year. The company was started by a visionary watchmaker by the name of George Favre-Jacot. His big idea was to put the whole manufacturing and assembly process under one roof. Nobody was doing it at that time and a lot of them still don’t. But much of Zenith is still there in the same place in a little town called Le Locle in Switzerland. That sense of location is important to Land Rover also. In 1948, just when Land Rover was getting going, Zenith has its first big hit, a watch called the Calibre 135 and then in 1969 – just when we were developing our first Range Rover prototypes – Zenith launched the El Primero, ‘the first' in the world with a self-winding chronograph movement. Personally speaking I have always admired the Zenith graphic – the combination of the name, typography and the star – it's very modernist in its execution. When it came to the choice for a watch partnership, Zenith seemed like a perfect fit: a luxury watch brand with strong credentials and heritage, and innovative in watch design. I felt Land Rover shared that desire to be creative and forward-thinking and to give customers products that they will love for life. The choice of the Zenith El Primero to start the collaboration was a natural choice given its distinctive design and status. It was therefore imperative to respect this icon; it had to remain unmistakable as an El Primero yet also allude to Range Rover DNA. The result is the Zenith El Primero Range Rover watch that was launched at the Paris Motor Show alongside the new Range Rover SVAutobiography Dynamic. I’m really happy with the watch, it’s a handsome timepiece, well balanced with visual logic. We highlighted the reductive nature of the modern Range Rover interior to the Zenith team who translated that into the dial of the watch, keeping it simple and unfussy yet maintaining its overall sports image. The 42mm case is made from ceramised aluminum which, like the aluminium architecture of Range Rover, combines light weight with extreme durability. The uncluttered look with its brushed slate grey dial and three subtle but highly legible chronograph sub dials is another link with the stealth-like nature of some of our sporting Range Rovers. The thing I understand about watches now – and my visits to Le Locle have certainly helped with that; as has spending time with Aldo Magada, CEO and President of Zenith and Jean-Claude Biver, President LVMH Watch Division and generally regarded to be the man who saved the Swiss watch industry – is the absolute passion for mind-boggling precision and attention to “ IT’S A HANDSOME detail. So much is still hand-made. Aldo has shown TIMEPIECE. WELL me some of the areas of the BALANCED WITH factory where they have introduced automation, for VISUAL LOGIC” example in the manufacture of the cases. You can develop machines to do just about anything – it’s all ultimately down to investment. But I think resisting that is part of Zenith’s story. Should the whole process become too automated, then the very idea of the hand-made Swiss watch will lose its charm. What you can still buy today is the product of a painstaking labour of love. There’s a lovely story about Zenith when they were sold to a US company in the 1970s, around the time the entire Swiss watch industry was under threat from cheap quartz movements. The new American owners said to them; ”We’re not doing Swiss movements anymore. We’re going to go quartz. Get rid of all the complex movements, the tourbillons all the rest of it…” Two guys at Zenith refused to do that, so they took all the tools, all the tiny little bits of clever Swiss machinery and hid it all, only for the traditional Swiss movements to be reintroduced years later. It’s all still there in their headquarters, as are many of the processes, and it is just so fascinating to observe, whether you’re an aficionado, a collector, or like me, someone who just loves to see beautiful things made beautifully. 36

Zenith CEO Aldo Magada (above left) hosts McGovern (right) in a early visit to Zenith’s HQ in Le Locale, near Lausanne, Switzerland. Much of the craft in Zenith’s watches has remained unchanged in over a century 37 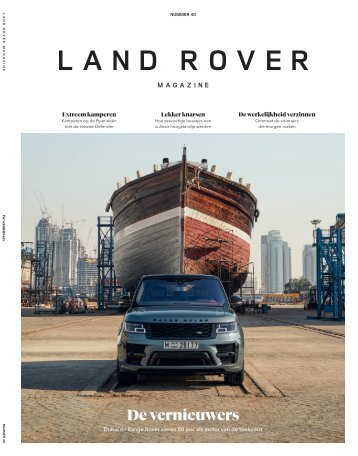 Are you sure you want to delete your template?